GregTech Community Edition is a total rewrite of GregTech for newer versions of Minecraft made with focus on performance and balance.
(description copied from CurseForge page)

GregTech 5 Unofficial (sometimes referred to as GT5U) is a fork of GregTech 5 created open-source by Blood Asp. It was originally created because GregTech 5 was incompatible with Forge version 1335 and up, but later versions of the mod reintroduce many of the older machines and generators from GregTech 4.

for MC1.12.2
Show
v1.10.8.599 by gabor6505
128x
64x
32x
Note: HanFox's Customiser will not affect Netherrack for GregTech ores; GregTech Netherrack ores will still be backed with the "pulsating flesh" texture. Players who want one of the other Netherrack textures may need to manually copy the alternate texture into the textures/blocks folder in their local copy of the PureBDCraft resource pack.

for MC1.7.10
Show
v5.09.31 by MauveCloud
128x
64x
32x
Note: Two circuit textures from IC2 are now overridden by this patch due to patterns in the way circuits are crafted since GregTech 5.09.28, so players are encouraged to make sure the GregTech patch is above the IC2 patch in the resource pack list. 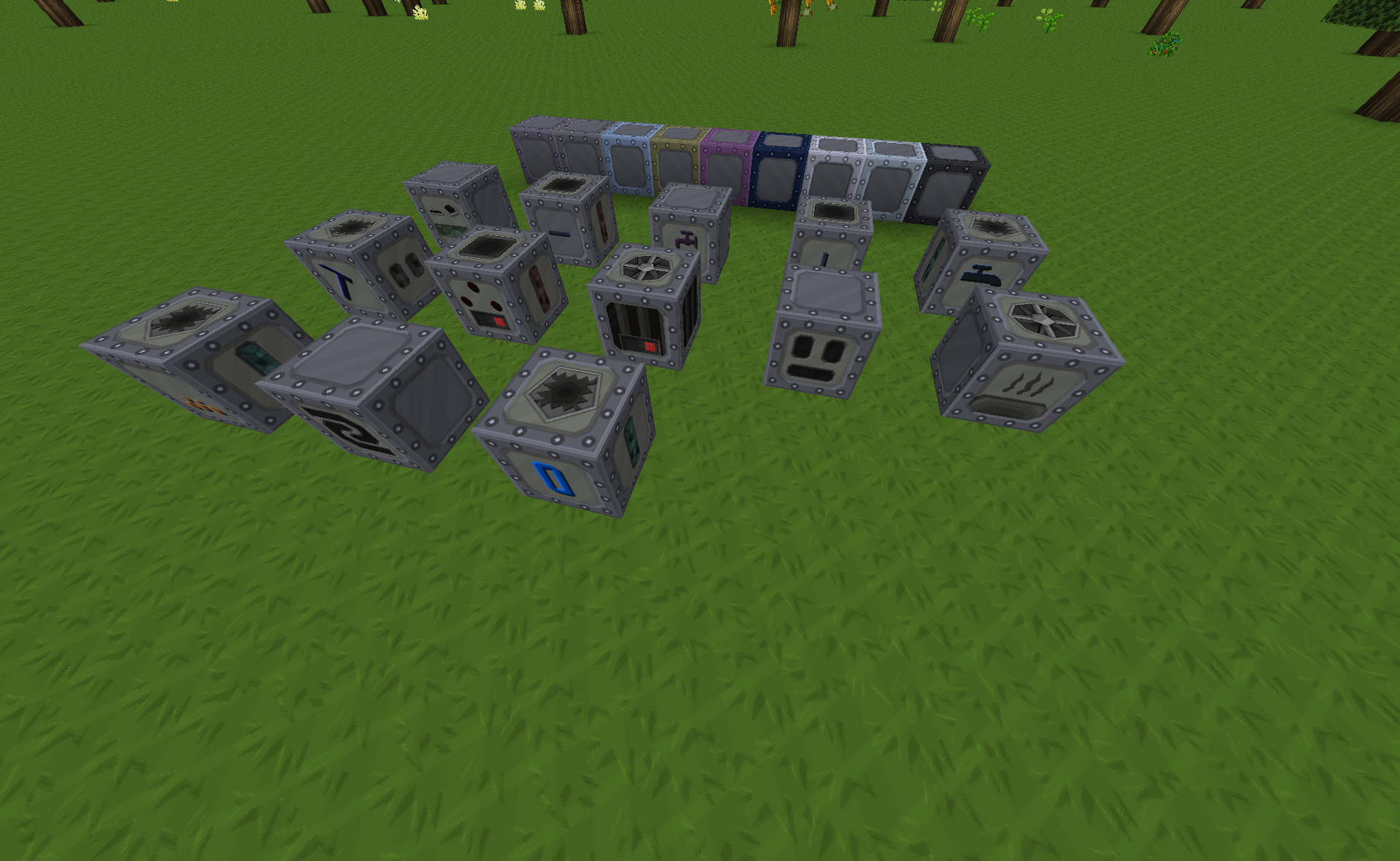 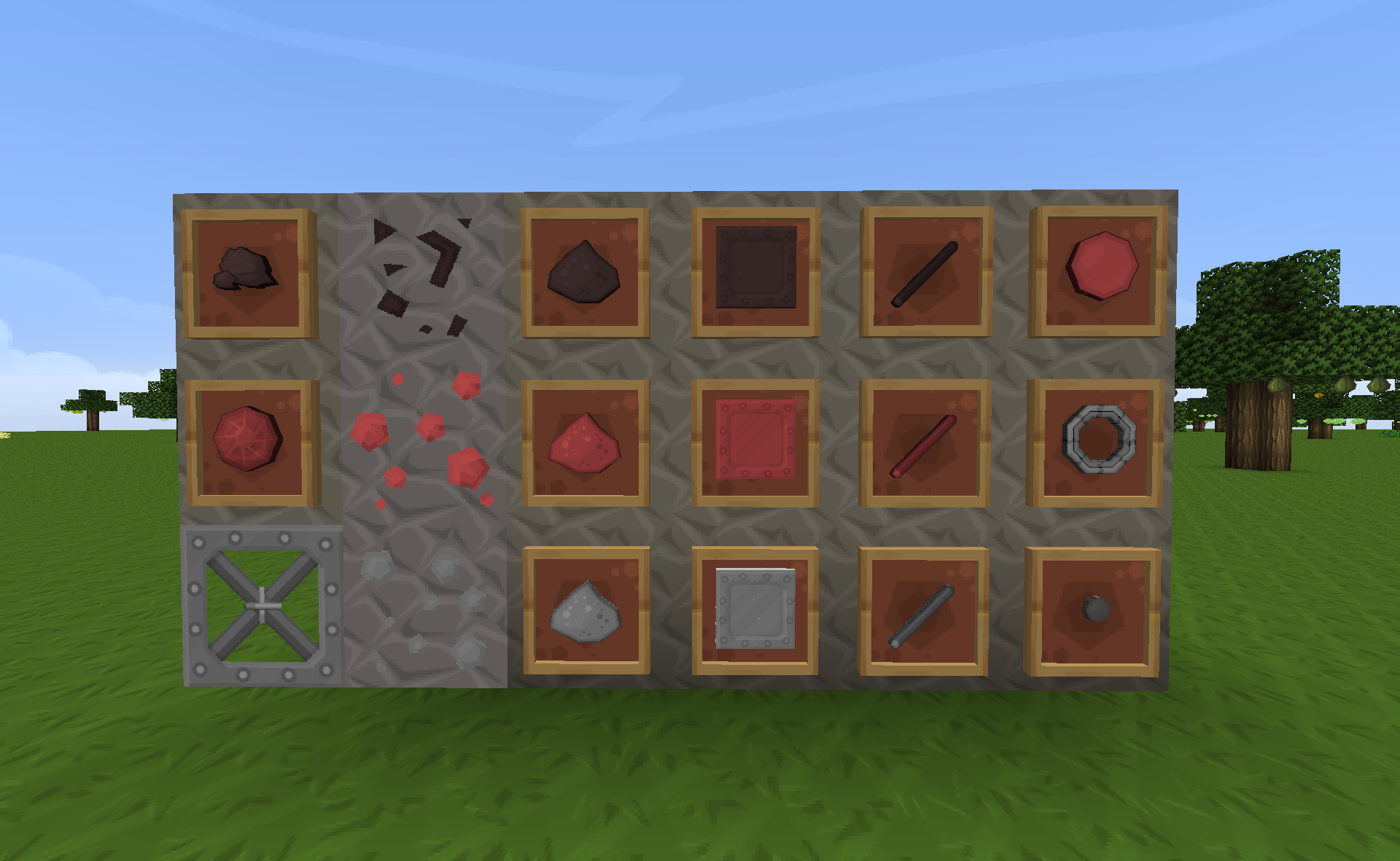 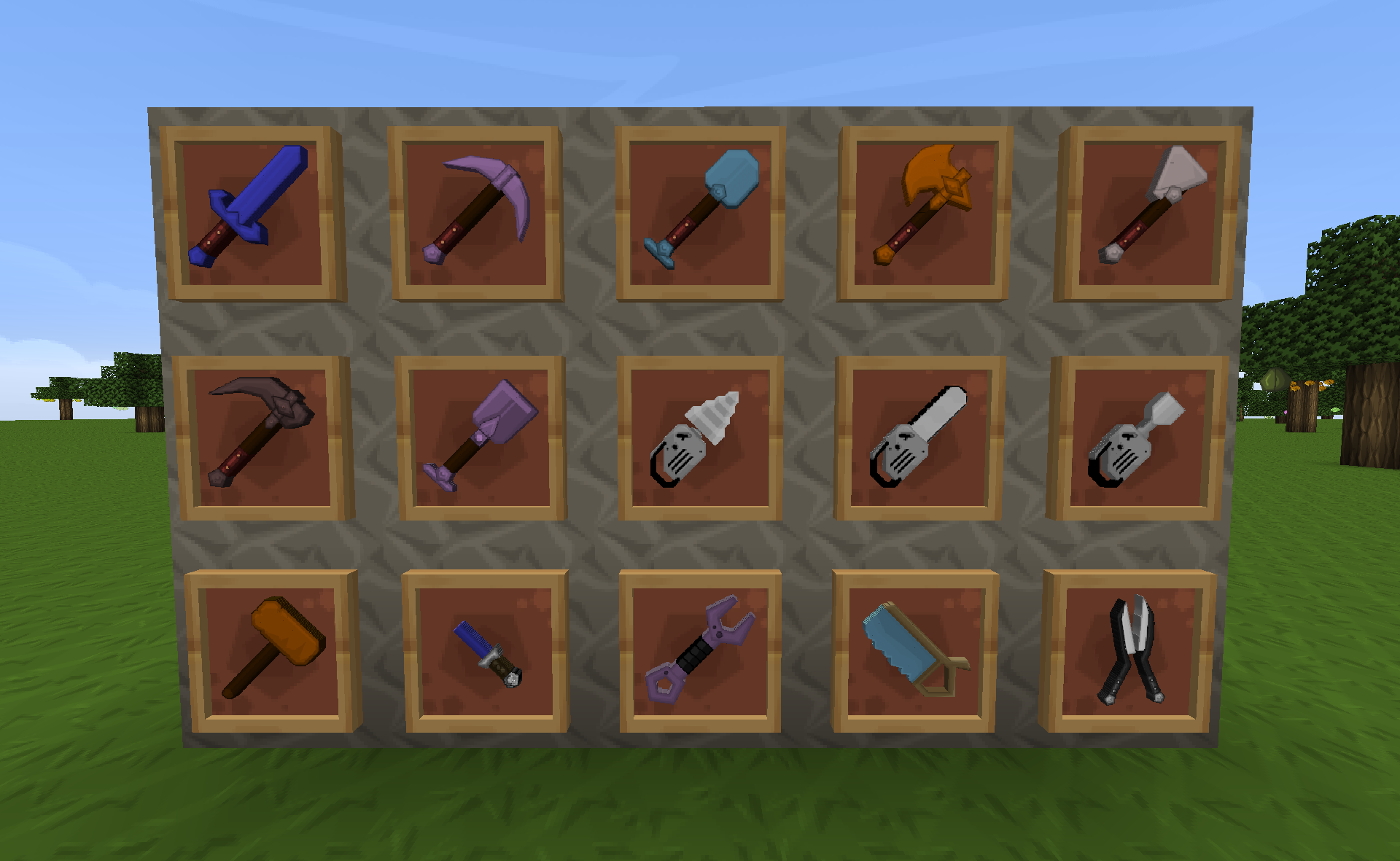 2020 Dec 04
Updated Chemical Reactor gui for GT 5.09 (two item output slots now).
Added extra font texture files for subscript and superscript glyphs (currently only used if you have GT++ and/or GTNH, but there is a pending Pull Request to add them to regular GT5u). (pulled after more careful reading of the rules)

2020 Nov 20
Updated GTCE tool textures for newer version of mod, and corrected a script typo that caused nearly all material-specific item textures (e.g. ingots, plates, dusts, gems, crushed ore) to be darker than they should have been.

2020 Feb 06
Added a few fluid textures:
Honey texture is simply copied from Forestry patch (since it is intended to be the same thing afaik).
Fluorine and Radon are recolored from another gas texture.
Added texture for small gear extruder shape.
Made different sizes of turbine item more distinct.
Better fix for centrifuge animation.

2017 Nov 01
Added textures for pump items (up to "insane" voltage, made by combining "cover" backgrounds of conveyor modules with 75%-sized overlay texture of pump machine, inspired by default texture of "pump module" item from GregTech 4 as shown on FTB wiki)
Removed textures of uncraftable rotors from 5.09.28+ packs, since some of them were now showing up for the LuV+ pump items.

2017 Mar 10
Added new folder to GitHub (will be separate download in BDCraft forum thread) to handle GT5u circuit changes
Removed conflicting circuit textures from this folder (that were for the old circuit components)
Added machine front texture and GUI texture for circuit assembler.

2017 Mar 02
Changed smooth forms of basalt, dark/light concrete, and marble to use shading at edges to indicate this, and plain forms of these stones are now recolored stone instead of recolored gravel (the textures that were formerly used for the smooth forms), because it felt all wrong to me to use recolored gravel textures for blocks that were not affected by gravity.
Fixed polarizer overlay texture (was using a 64x source texture in the 128x images, but similar enough to the assembler that I could modify that texture to make it look decent, instead of trying to upscale)
Fixed 1.10.2 crop textures (now expected under gregtech folder instead of ic2 folder, though the patcher from http://forum.industrial-craft.net/index ... post206805 is currently needed to use an IC2 build that supports crops)
Made enhanced version of Fusion Computer GUI.
Added texture for pump machine.

2017 Mar 01
Added transparent blank overlays for small gears of types diamond, shard, and shiny. (which had been inheriting overlays from default textures, making the gears look bad)
Fixed new issue with ore overlays being too dark (GregTech seems to do better at coloring them when the textures use the "Greyscale" colorspace, but the Sphaxify tool was converting them to RGB colorspace on the resize)
Fixed old issue with buzzsaw and turbine blades being too dark (and possibly some other items as well)
Removed some block textures that had been copied from default textures (and with the Sphaxify tool, would end up as 8x8 in the 64x patch and 4x4 in the 32x patch); They would get used when plates (sometimes double, triple, etc. plates) are placed as covers, so they wouldn't show up in NEI/JEI.
Added some fusion casing textures (some include GrumpyPirate's "atom" texture from the "Useful Resources to Sphaxify" thread).
Added crop textures for: Corpseplant, Meatrose, Zomplant (reused from Rose for first three stages, modified for final stage)

2017 Feb 28
Started using the Sphaxify tool. (thanks GrumpyPirate for making it)
Added GitHub repository (link below, under "Contributing")
Removed auxiliary versioning information (since watching this thread or the GitHub repo should tell you when the patch is updated)
Added patch for MC 1.10.2 version of the mod.

v0.32 - 30/06/2016
Corrected some image sizes in the 128x patch (that were previously 512x for unknown reasons; 512x patch will still have them at full detail, for those few capable of using it)
Removed several GUIs that are not actually used by the mod.
Resized many fully-transparent overlay textures to 16x across all sizes of the patch, since they don't need the higher resolution.
Removed many fully-transparent overlay textures that were redundant with default textures.
Fixed half-full cadmium battery texture, so it no longer looks like a lithium battery.

v0.31 - 08/06/2016
Removed machine textures for Rock Breaker, after noticing that the same files are used for the Charcoal Pile Igniter and Seismic Prospector, which my textures are not appropriate for.
Attempted item textures for: electric screwdriver handle, buzzsaw handle, rolling pin
Added item texture for cookie shaped dough (re-colored from base Sphax texture for cookie)

V0.15 - 13/01/2015
Added all but one of the thaumcraft aspects (Couldn't come up with a good looking version for the brain looking one)
Machine Casing Warnings all done (Thanks Eskimojo14)
Redid Ovelay Locker and Maintenance
Added some Higher Definition Pipes (They look okay, but could probably be reworked)
Gregtech Books
Dyes (Some taken from Biomes O'Plenty patch)
Plank Covers (Taken from Forestry Patch)
Bolt, Foil, Screw, and the 2 Springs MetaItems done (Thanks NovaManga)

V0.14 - 27/12/2014 by hazado
Animated the Compressor and Bender overlays and the Steam Furnace Front
Added the Locker Overlay with 0-9 Numbers and Hazmat Icon
Maintenance Overlay done as well
Machine Casing Clean Stainless Steel done
Did all the basic GUI's and a few other complicated ones (Didn't put fancy icons in there, Someone more talented than myself can do that)

V0.13 - 25/12/2014 by hazado
Finished all the fluids
Did all the Basalt, Granite, Concrete and Marble Decoration Blocks (Colors look off, someone fix it!)
Coal and Lava Boiler front (Animated goodness here)
Firebox Machine casings
Radioactive Hazard Decoration Block (Need someone to make up the others)
Meta Items done - Crates (Need the Plate for leaf to be done), Exquisite Gems, Centrifuged ore

Old Changelog
Version: 4.05h
*Compatible with 1.6.4
#Added: Tiny piles of dust
#Added: Dirty pules of dust
#Fixed: Some textures were 512x...oops.
#In-Progress: The textures are being remade properly and will scale better. Will be able to export all sizes as soon as I am finished.
#Changed: I am adding versioning information into the name of the files to keep track of my progress. My own insanity...

Version: 2.78a
#Added: Safe GUI
*Tweaked: AdvSafe block to be like old IC2 personal chest. So blue instead of a weird pinky/purple

Version: 2.60c
#Added: Machine Parts and Hulls
*Tweaked: nearly every single block in the terrain.png to clean up shading and whatnot :x
*Tweaked: A lot of the blocks now have arrows on which were missing before
*Overhauled: Side of the Centrifuge block

Version: 2.55a
*Updated: ElectricAutoWorkbench GUI again - I left the old buttons so it's backwards compatible for now

Version: 2.53a
#Added: Implosion block (thanks pcmaster160) and GUI
*Updated: AutoCraftBench GUI (on older versions of the mod you'll see either one or two unclickable buttons)

This patch is now on GitHub - to contribute, fork the repository and make a PR with any additions/changes - I'll look at them when I get the chance.

Show
pcmaster160 for a lot of the machine blocks
Timmie3054 for various items and blocks
CadenDonuts for various items and blocks
HanFox until version v2.82a & Plank Covers from later versions
Quintine for adding whatever came v2.82a - 3.08
DumbGuyDan for anything 3.08g until he disappeared December, 2013 as did his links.
Cerous for anything after 6th September, 2014
hazado for anything after 24th December, 2014
EskiMojo14 for Warning Blocks
NovaManga for bolt, foil, screw, and the 2 springs
IamProvocateur for dyes
MauveCloud for anything after 12th December, 2015
Sphax for some re-used plank and dye textures
Jackleton for re-used spray can textures
GrumpyPirate for Atom texture (used in fusion casing "glass" textures)
gabor6505 for GTCE textures
Last edited by MauveCloud on 21 Jan 2021, 21:31, edited 57 times in total.
Quote
0 ×
If you like our work please consider becoming a Supporter and get an ad-free experience.

Is this version compatible with MineCraft 1.5+?
Quote
0 ×

It should support MC1.5 to some degree, but I no longer maintain the patch.
Quote
0 ×
If you appreciate a post give it a diamond!

For me it doesn`t works. There will be no new version of texturepack?
Quote
0 ×

I am currently updating this for 1.5.x.

I am about 90% done and over the next few days will be making more progress. I will upload as soon as I get all the blocks done. The rest of the items will be finished later.
Quote
0 ×


But i have a question about the GUI of the Fusion Computer (Part of Fusion Reactor). It's not textured, right? I would love to see this one textured.

Yeah. I mostly worked on things that just needed a bit of a tweak. I will be tackling the harder stuff once I get the minor stuff out of the way. Better to have it mostly correct than to wait for one piece.

I am working on it, but I have some stuff coming up that will make it hard to update for a week or so. Be patient. It will get updated.

I am astonished how frequently things get uptdated here!

The texture pack is like a big diamond chest full of diamonds and yes i am sorry for my impatience.

Again great work and thanks for the reply
Quote
0 ×

How do install this?

I presume i stick it in the /mods/ folder of my Sphax TP Compilation.
Quote
0 ×

Yes. The zip has the mods folder in it, so you just merge it with your mods folder inside the Sphax TP and it should be installed properly.
Quote
0 ×
228 posts
Post Reply
Jump to